It'd been some time since I'd set up a full Rails stack and deployment process on Amazon Web Services. I thought it would be worth trying out rubber from scratch to provision a full {Nginx, Passenger, PostgreSQL} stack on a single AWS host, with as much automation as possible, but without prematurely resorting to the cognitive-overhead of Chef/OpsWorks. This is my attempt to document the process, as I ran into a few roadblocks along the way.

The RailsCast on rubber is a great place to start, as it gives a good overview/refresher on some of the primitive pieces such as setting up EC2 key-pairs and so on. This post is written under the assumption it has been watched and understood, but I'll be targeting the complete_passenger_nginx_postgresql template rather than complete_passenger_postgresql, which the episode uses. The various other rubber templates are all available in its repo.

I started out with a super basic Rails app, unimaginatively named bloggy. The git repository is available here; each commit in the history corresponds to a step along the way. It has a root route which renders a page with the current time and hostname, and a single REST-ful resource: /posts.

At this point, we're ready to fire up the EC2 instance:

If all has gone well, and the keys were setup correctly ahead of time, it should be possible to ssh to the newly launched instance:

With the instance running, we can now instruct rubber to install the relevant packages that are necessary to build the environment. Locally, run bundle exec cap rubber:bootstrap. This can take a while: it installs Linux updates, configures Nginx, builds and installs ruby, etc. This is the core of the annoying, manual, error-prone work that we seek to eliminate with rubber.

Once that completes, the instance is mostly ready to go. After ssh-ing to the instance we can verify that the correct version of ruby is installed, etc:

With the instance ready, we can now use capistrano to deploy. This is where I first ran into issues. After attempting to deploy using bundle exec cap deploy:cold, I received the rubber error output:

It turns out we need to delete the default Nginx configuration, which is conflicting with the port (obviously 80) we're attempting to use. After ssh-ing to the instance:

Back again locally, attempt to deploy once more: bundle exec cap deploy:cold. It should succeed this time around without the error message we encountered previously.

With the instance provisioned, we are close to success. However, at this point I got an error page at http://ec2-54-69-180-182.us-west-2.compute.amazonaws.com in the browser. curl gives some insight as to what's going on:

To proceed, we need to take a look at the Nginx logs. After ssh-ing again to our instance, we can tail -f /var/log/nginx/error.log and notice that:

We need to create an .env file in the Rails app root directory that the dotenv-deployment gem will use to set the missing SECRET_KEY_BASE cryptographic environment variable that is referenced in the app's config/secrets.yml. Locally, create a .env file and copy it to the server:

Back on the server, sudo mv /home/ubuntu/.env /mnt/bloggy-production/shared/ to copy the file to the appropriate place. The final repo commit ensures that capistrano will symlink this from the release directory into the shared directory on deployment.

One final deployment should do the trick to get this into the Rails app on production: bundle exec cap deploy. Sure enough:

With that in place, we can visit the URL once more:

And there we have it! The full stack {Nginx, Passenger, PostgreSQL} app is now live on the EC2 instance. This process falls slightly short of the ideal of one-click instance provisioning, but it's pretty close5. Going through this additional work seems preferable to me versus Heroku or Elastic Beanstalk - both of which have their place6 to be sure, but ultimately abstract away rather more of these details than I would prefer.

With the basic app deployed with a production-grade full stack using rubber - we can be sure we have a clear, repeatable, configurable path for future vertical and/or horizontal scaling if and when the need should arise.

Finally, the deployed instance can be dismantled via bundle exec cap rubber:destroy_all when it's no longer needed, as of course EC2 bills by the hour.

Thanks to the therubyracer gem added earlier, we can observe that the application's JavaScript has indeed undergone precompilation in deployment. 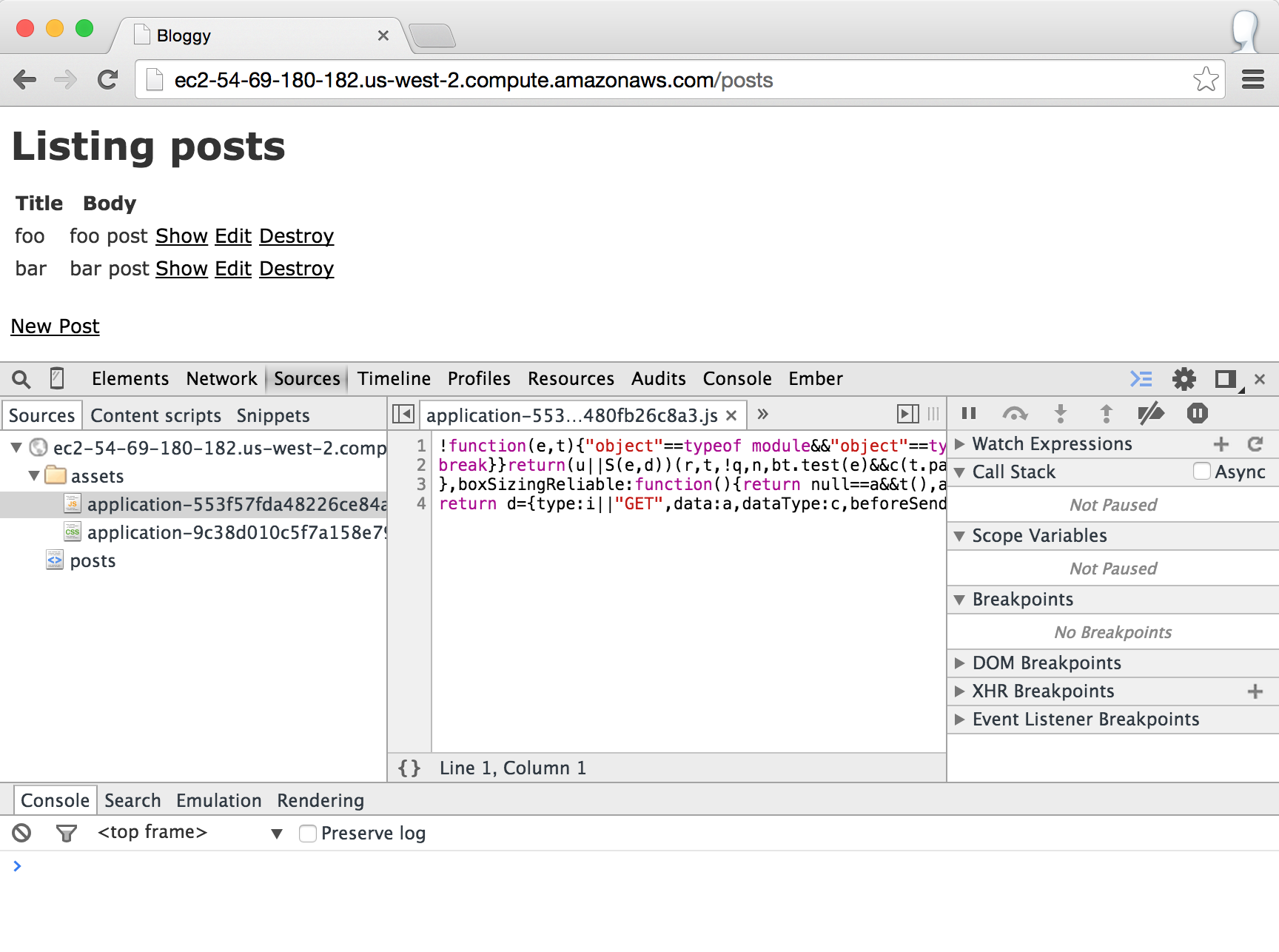